skip to main | skip to sidebar

Update: It's been crickets here for the past 8 years, almost to the day. For the last five I've been working on a book project: The Imperial Japanese Army Volumes 1 and 2, which, happy to say, are now in print. 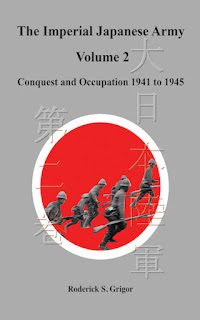 Officially they are known to the world as:

Title: The Imperial Japanese Army Volume 2, Conquest and Occupation 1941 to 1945
Author: Roderick S. Grigor
Publisher: Paper Blossom Books
Year: December 2020
Language: English
ISBN 978-1-7772728-3-8 (eBook)
ISBN 978-1-7772728-1-4 (paperback)
Softcover edition: 348
Take a trip through Japan, the territories and occupied lands of the Imperial Japanese Empire as it existed between 1941 and 1945. This is a reference work that takes an unprecedented look into closely held secrets of the Imperial Army, see it as never before.
Includes many original maps and illustrations.
Available from Amazon
Posted by R.G. at 3:37 PM

Hello, Rod! I look forward to reading those soon!

R.G.
I'm Roderick Grigor an artist and author. My paintings fit the genre of Hyper-realism and the 2 volume book I've written is on World War 2 history. While the challenge of creating an original work is daunting, pushing the envelope is always exciting. The header image for this blog is 'Dead Grass, Self-Portrait', 22" X 28", acrylic on canvas, 2006.